November 8, 1998, Kappa Phi Gamma Sorority, Inc. because America's first women's Greek-letter organization to promote a South Asian interest.  Her root date back to the Jester basement at the University of Texas at Austin where 27 collegiate women from a myriad of backgrounds collaborated to form what would be the more diverse and strongest Sorority of its kind.

The Founders envisioned a Sorority built around 8 Principles: Character, Leadership, Scholarship, Sisterhood, Service, Culture, Womanhood, and Self.  Realizing the quality of The Sisterhood could never be compromised, the Founders' every endeavor thereafter was directed toward fostering these 8 Principles and establishing a solid foundation for the future before embarking on plans for expansion.

August 23, 2002, four women Chartered the Epsilon Colony in Boston, Massachusetts, thus becoming the first Colony on the East Coast.  They aspired to continue the vision of the National Founders, as well as embark on new friendships and contribute to their community during that process. 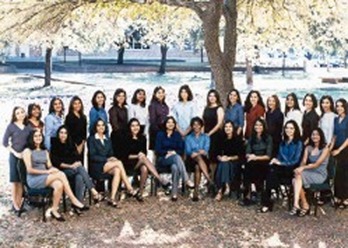